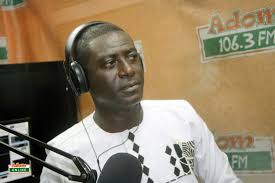 The anti-corruption campaigner believes these
top officials never deserve these salaries
– The BoG governor, according to Captain Smart’s
list, is the highest paid official.

The morning show host of Adom FM, Captain
Smart, has listed the salaries and allowances of
top government officials in Ghana.
Captain Smart, known best for his fight against
corruption, has decried the deteriorating state of
affairs in Ghana despite the huge salaries and
allowances that the very leaders appointed to
work are taking home every month.

“Ghana is heading towards a financial reckoning
because of exorbitant privileges. There are too
many public employees doing little work and
getting crazy salaries and benefits at the
expense of the taxpayer,” Captain Smart wrote.

The anti-corruption fighter does not believe top
public officials must be paid such high salaries
when in fact their output and productivity at
work is appalling.

.
Below is the full list of salaries Captain Smart
listed:

1. Governor of the Bank of Ghana – GHC 124,100
This amount is the highest salary that any
government appointee takes home on a monthly
basis.

Dr. Ernest Addison is the man who
supervises the entire banking sector in Ghana
today.
He was behind the merger of five struggling local
banks in Ghana today.

Dr. Ernest Addison has
been praised for bringing some sanity in the
banking sector.

The commissioner general of the GRA, Kofi Nti, is
the second highest paid government official in
Ghana today.

His duty is with revenue
generation.

He makes sure taxes are paid across
the country.

His duty is to oversee the
insurance of Ghanaian workers ahead of
retirement.

His task is to ensure that Ghana
remains the leading exporter of cocoa in the
world. As it stands now, Ivory Coast is the
leading country with Ghana being the second.
With a target of 1 million metric tonnes of cocoa
a year, Joseph Boahen Aidoo is in no doubt
encumbered with many responsibilities.

Here are the other salaries of other powerful
government officials as revealed by Captain
Smart:

Captain Smart insists he has never in his live
been involved in anything corrupt and has no
intentions of engaging in any kind of corrupt act
in future.

In a Facebook live video streaming, he accused
politicians of talking too much wondering why his
name has not popped up if he indeed he has been
corrupted or stooped so low to be bribed by any
of them.