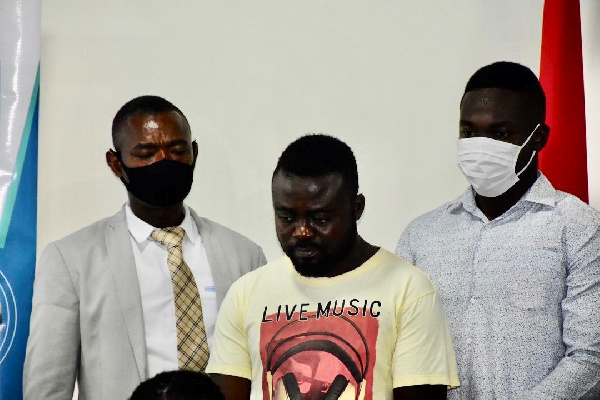 The Minister of Communications, Ursula Owusu-Ekuful, has revealed that the investigation that led to the arrest of the operator of the pornographic site, empress leak, Anderson Ofosuhene Anim( alias Mario Gee), was launched when an underage Senior High School(SHS) student made a complaint to Computer Emergency Response Team( CERT-GH) of the National Cyber Security Centre(NCSC) in January this year after Mario Gee had uploaded her sex tape onto his website.

Speaking yesterday at a press briefing following the arrest of the notorious pornographic ‘entrepreneur’, Ms Ekuful disclosed that vital information leading to Mario Gee’s arrest was unearthed after the report by the SHS student.

Subsequently, Mario Gee was arrested at Osino in the Eastern Region, and has been charged with obscenity, child pornography and extortion after initial investigations into his illicit activities.

The minister noted that the government is taking strident measures to deal with the activities of cybercrime, and it’s making it easy for victims to report to mandated agencies for appropriate action.

“As part of Government’s efforts towards the protection of Ghana’s cyberspace, the National Cyber Security Centre in 2019 launched a Cybercrime/Cybersecurity Incident Reporting Point of Contact (POC), to provide an effective mechanism for citizens to report suspected and identified cybercrime and cybersecurity incidents,” Ms Ekuful reiterated.

The minister warned the public to be wary of persons who ask for their intimate pictures or videos since they could end up on pornographic websites, emphasising that the activities of publishing sexual contents of persons so as to extort money from them or asking victims to pay money or have their sex videos or pictures published were on the rise.

“Out of a total of 296 cases received by the National CERT between January 1 to June 30, 2020, 27% of the cases, representing a total of 79 cases, are related to either sextortion, non-consensual sharing of intimate images or child online abuse,” she added.

It came to light that Mario Gee extorted between GHC500 – GHC1000 from victims with the promise not to publish their sexual content but still went ahead and published them.