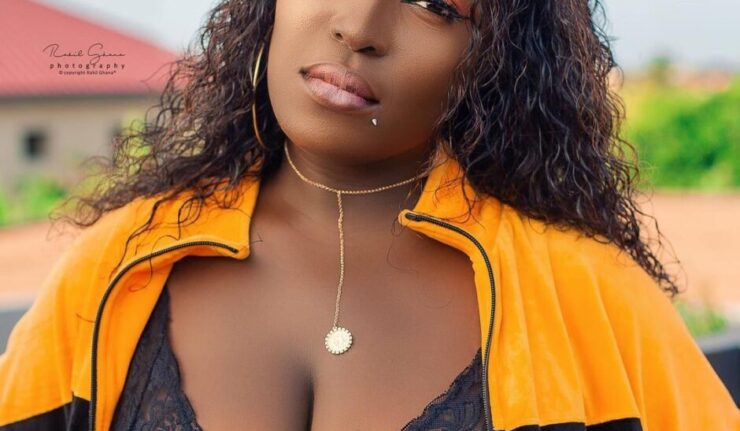 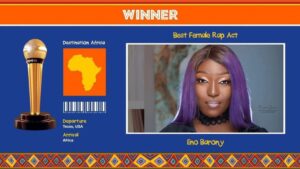 Becoming the first Ghanaian female talent of her kind to win at the African Muzik Magazine Awards and Music Festival (AFRIMMA), Rap performing artiste, Eno Barony, has been announced ‘Best Female Rap Act’ of the year at the 2020 edition of the sole award ceremony in Diaspora that caters to all musical genres including but not limited to Afrobeats, Assiko, Bongo, Decale, Funana, Genge, Highlife, Kwaito, Lingala and Soukous.

Eno came to wider attention when she released her first single, “Tonga”, in 2014, which received commercial airplay. She later recorded more songs including “Megye Wo Boy” in 2015, on which she collaborated with Abrewa Nana. In 2015, her mother died. After several months of mourning, she broke the silence with hip hop song titled “The Best” with multiple award-winning Togolese artiste and Brand Ambassador for Togocel, Mic Flammez.

She recorded a single, “Daawa”, with Shatta Wale in 2016. The same year, she collaborated with rapper Kwaw Kese on a single called “GARI”. She also collaborated on two other singles, “Touch the Body” with Stonebwoy, and “King of Queens” with Medikal. In 2017, she released a song titled “Juice Me” followed by another single with Ebony Reigns, titled “Obiaa Ba Ny3”.

Due to the global pandemic – COVID 19, the awards ceremony was broadcasted virtually live on AFRIMMA YouTube page from Dallas, Texas to millions of viewers. The festival had outstanding performances from veteran Fally Ipupa, Nigeria red-hot, Rema and Soraia Ramos from Cape Verde. Best African Dancer, Poco Lee and other artistes like Eddy Kenzo, Gaz Mawete, Nadia Nakai and Master KG were other performers of the night.

Master KG, took home the biggest awards which include Artist of The Year Award, Song of The Year, Best Male Southern Africa and Best Collaboration with Burna Boy on Jerusalema remix.

”There were initial doubts about pulling this off, but seeing we pulled this off today fills me with so much joy and I want to express my appreciation to our sponsors, the AFRIMMA team, the artists, dancers, video editors and everybody that played a part in making history today”, Anderson Obiagwu, Founder/CEO AFRIMMA said in conclusion.