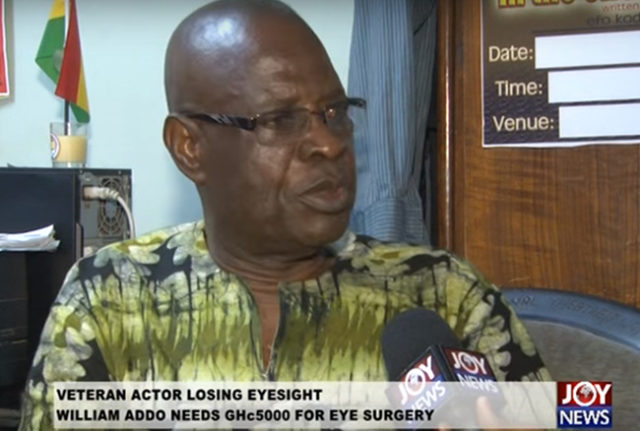 After going through two glaucoma and cataract surgeries in 2016, legendary Ghanaian actor, William Addo aka Akpatse has gone totally blind and appealing for support to help raise money for medication.

According to News, Akpatse, who is noted for playing the role of a trickster in all his movies confirmed the sad news himself.

“Hmm… I have totally gone blind…all the surgeries I underwent years back have been in vain…The deterioration of my eyes started again early last year(2018)”, He said.

“When it started I went to a Hospital in Sogakope, and I underwent a series of tests and doctors diagnosed that it is a combination of glaucoma and cataract..and to my outa dismay, doctors told me it’s incurable …so am now totally blind”.

After thanking benevolent persons like Kwame Sefa Kayi, Bola Ray, and others for funding his previous surgeries, Akpatse, which literally means a trickster in the GA dialect appealed again that: “Ever since I started losing my sight, I spend GH¢ 500 on medication every month…and now that am totally blind, raising money is very difficult so am appealing again for assistance”.He stated.

Akpetse, before appearing in a number of Ghanaian movies was a stage actor who studied at the School of Performing Arts, University of Ghana

He was retained as a teaching assistant at the school for his brilliance after he graduated.

He later went abroad on a scholarship to have his masters degree and came back as a lecturer in charge of acting at the Theatre Arts Department of the School of Performing Arts, University of Ghana.

Akpatse, as he is famously referred to, was later asked to go and work at the National Theatre where he was in charge of concert party productions.

He shot to fame through the popular TV series, ‘TV Theatre’.