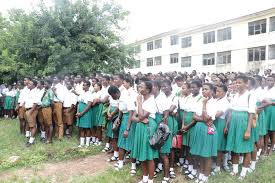 A private school, Dwenti Senior High School, in the Sekyere Kumawu District of the Ashanti Region, has been closed down over COVID-19safety protocol breaches.

The proprietor and the headmaster of the school have also been arrested.

The District Chief Executive (DCE) for the area, Mr Samuel Addai Agyekum, ordered the closure of the school and arrest of the school authorities during a monitoring exercise by the COVID-19Response Team with the District Security Council on Saturday, 11 July 2020.

Mr Addai Agyekum said the school had disregarded the directive by the President to ensure that dormitories and classrooms are decongested to secure the safety of students.

The students, he said, were screened after his attention was drawn to the disregard to the safety protocols.

Preparations, the DCE said, are underway to move some of the students to a new accommodation facility which has been secured to ensure that the school’s dormitories are decongested.

Mr Agyekum said the decision was to ensure that the students weres safe to it their final exam successfully without contracting the deadly coronavirus.

The students and teachers of the school have pleaded with the DCE to release the headmaster and proprietor.

Meanwhile, the National Council of Parent-Teacher Associations (NCPTAs) has appealed to the government to send home all senior high school (SHS) students to prevent further spread of the deadly COVID-19.

The appeal of the NCPTAs follows reports that some students and teachers of some SHSs in the country, have tested positive for COVID-19.

The other 10 schools include Mawuli School, Bishop Herman College in Kpando, Dabala Technical School and Mawuko Girls SHS in the Volta Region.

The remaining are Archbishop Porter Girls, Ahantaman Girls, Adiembra SHS and Diebene SHS all in the Takoradi Metropolis.

A statement issued by the NCPTAs and signed by its National President, Mr Alexander Yaw Danso, on Monday, 13 July 2020, explained that since the reopening of schools in June and upon close monitoring of the COVID-19 situation, it had made a number of observations which includes the following: “Not all schools have received the Personal Protective Equipment (PPE) as promised by the government. The schools which have received supplies did not get full supply of the PPEs. The COVID-19 safety protocols, especially the social-distancing and wearing of nose masks, are not being adhered to by students”.

It also observed that: “Not enough health personnel are either stationed in or attached to many of the schools for routine surveillance due to the pandemic”, adding that “inadequate space in some schools has resulted in overcrowding in dormitories, defeating the purpose of the social-distancing protocol, even though the initial communication to parents from the government indicated that Day Students in boarding schools would be converted to boarders (allowed to stay in school as boarders till completion of their examinations), unfortunately, because of lack of space in some schools, Day Students continue to remain home commuting to and from school, making them more susceptible to getting infected, thereby increasing the probability of infecting others within the school community.”

The NCPTAs further said “more worrying is the fact that despite good counsel and encouragement, most parents insist their children should be brought home.”

According to the NCPATAs, its “checks have revealed positive cases of COVID-19 infection among our children in the senior high schools, corroborating same, as put out in the public domain by the media due to the lapses in the implementation of the COVID-19 and the concerns of the association”.

The NCPATAs stated that its “fear, again, has to do with the voter registration exercise in the schools, which has the tendency to compromise the safety of our children because many more people would be allowed entry into the schools. This is rather worrying, as parents are barred from seeing their children for the reason of minimising the spread of the Coronavirus to safeguard the precious lives of these young ones.”

The PTAs indicated that at their National Executive Consultative meeting, they concluded that: “In the current circumstances, the children are psychologically unstable and would, therefore, not be of sound mind to write the WASSCE and BECE and come out successfully.”

The NCPATAs, therefore, suggested that: “These examinations be postponed till the situation is brought under control”, adding that the “schools should be closed down (all students must be sent home) immediately to avert further spreading of the Coronavirus among our children and staff.”

It further suggested that: “In the event that students are to be sent home, parents are advised to endeavour to isolate and test their children for the 14-day period before integrating them into the larger family for the sake of everybody’s safety.”

The NCPATAs further pleaded with the government to, “as a matter of urgency, consider the parents’ plea and send” their “children home.”