BREAKING NEWS – Dad in trouble for teaching minor to drive, while other kids sat on car top 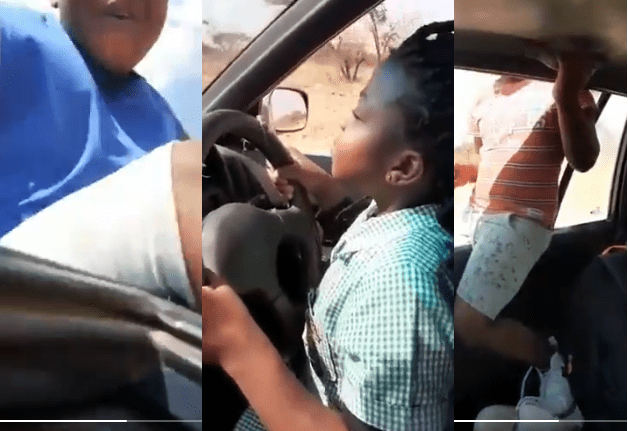 A father of three is in trouble after he recorded his daughter driving a car while one other son was on top of the car and another was hanging by the passenger window.

He says the matter was taken up by the MEC of social development and the Minister of Transport who have since contacted him for questioning. A case has been opened and he has been attending court sessions.

He says teaching his children how to drive has been their lifestyle and he didn’t know it was against the law.

In the video, a man is heard asking one Lebza if she enjoyed driving. He also talks with two of his children, one on top of the car while another was seated by the window, with half part of his body hanging outside.

GUYS, PLS TLOGELANG GO NROGA… A CASE HAS BEEN OPENED AGAINST ME… In the video, it’s me n my two boys teaching Lebza how2drive. That’s how I live with my children. I didn’t know gore I’m making a mistake until MEC of social development & minister of transport ATTENDED the cast So the police are busy with me. I’m attending the court left and right. I’m in BIG TROUBLE, ene lena ebe lesa tsebe gore it’s me on the video, that’s Y lejo ROGAN& So plus.

Watch Video of Lebza driving a car below