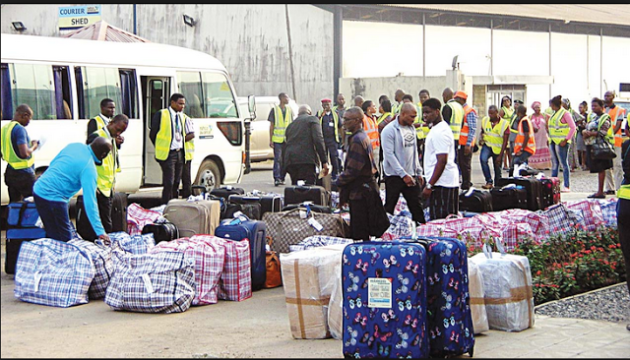 The United States of America has deported 642 Ghanaians convicted of various offences, including acts that undermined border control and the integrity of the US immigration system, in three years.

A report on the activities of US Immigration and Customs Enforcement (ICE) and Enforcement and Removal Operations (ERO) in the 2018 fiscal year said the Ghanaians were deported between 2016 and 2018.

According to the report, 94 Ghanaians were deported from the USA in 2016.

In the year 2017, the number of Ghanaians deported from the USA witnessed an astronomical 69.1 per cent jump to 305.

Enforcement and Removal Operations (ERO) identifies, arrests and removes aliens who present a danger to national security or a threat to public safety, or who otherwise undermine border control and the integrity of the US immigration system.

Immigration and Customs Enforcement (ICE), on the other hand, shares responsibility for administering and enforcing the nation’s immigration laws with US Customs and Border Protection (CBP) and US Citizenship and Immigration Services.

The removal of African migrants went up – in some cases, more than doubling.

Despite a six per cent drop in overall removals, there was a significant rise in the removal of migrants from countries such as Gambia, Niger, and Senegal.

On January 25, 2017, President Donald J. Trump issued an Executive Order, Enhancing Public Safety in the Interior of the United States.

It set forth the administration’s immigration enforcement and removal priorities.

Subsequently, on February 20, 2017, the Department of Homeland Security’s (DHS) implementation memorandum, Enforcement of the Immigration Laws to Serve the National Interest, provided further direction for the implementation of the policies set forth in the Executive Order.

Others are persons who have engaged in fraud or willful misrepresentation in connection with any official matter before a governmental agency, persons who have abused any programme related to receipt of public benefits, those who are subject to a final order of removal but have not complied with their legal obligation to depart the United States, and in the judgment of an immigration officer, otherwise pose a risk to public safety or national security.

The department continued to operate under the directive that classes or categories of removable aliens are not exempt from potential enforcement.

Ghana, US tango over visa restrictions

Ghana and the United States of America are in a tussle over plans to deport over 7,000 Ghanaians from the US to Ghana.

While the USA said Ghana has since 2016 not adequately co-operated to provide travel documents for the affected persons, Ghana disagrees.

This year, the US imposed visa restrictions from February 4 2019, as its embassy in Accra discontinued issuing all non-immigrant visas (NIV) to domestic employees (A3 and G5) of Ghanaian diplomats posted to the US.

Consular officers also limit the validity period and a number of entries on new tourist and business visas (B1, B2, and B1/B2) for all Ghanaian executive and legislative branch employees, their spouses, and their children under 21 to one-month, single-entry visas.

It said since July 2016, the US Government had engaged with the Government of Ghana in both Washington DC and Accra on the matter without much success.

But, the Ministry of Foreign Affairs and Regional Integration expressed disappointment with the decision by the United States to implement visa sanctions on Ghana for alleged lack of adequate co-operation in accepting Ghanaian nationals ordered removed from the US.

It said those allegations were unfounded, and the sanctions imposed on Ghana were without any justification.

Ghana, as a sovereign country, has the duty to, and would continue to, protect her nationals all over the world by ensuring that appropriate processes were undertaken in all issues relating to her citizens’ deportation from other countries, the ministry said.

A statement issued by the ministry’s Public Affairs Directorate said the government had always co-operated with the US authorities in the processing and removal of Ghanaian citizens who had been cited for deportation from the US to Ghana.

It said the Government of Ghana was worried about past experiences where Ghanaian deportees were sent home in belly chains and physically cuffed to their seats on the aircraft.

It, therefore, urged the US Government to recognise and ensure the deportation processes are consistent with international b